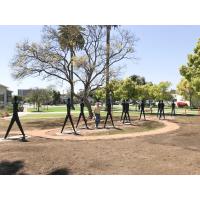 Contemporary Chinese artist, Wang Luyan, has donated a ten-piece sculpture set entitled “The Walkers” to Whittier College.  The sculptures are being installed now on the lower campus, with most of the work now being landscaping. If you drive North on Painter Ave. near Whittier College, you can see the sculpture being built. As explained by the artist, “The Walkers appear to be advancing and retreating simultaneously – the uncertainty of the direction that The Walkers are headed towards represents the ambiguity of humanity’s dreams and goals. People may have already deviated from their goals even though they think they are moving toward them. While moving towards the future, one is also moving backward towards the unforgettable past.”

Mr. Wang has a long relationship with Whittier College, and he made his donation to commemorate his late brother, Wang Xinsheng, who attended the College in the 1980s as an exchange scholar from China. “Mr. Wang’s gift and the installation of the sculptures at Whittier College will enrich the cultural interest of our campus for students, faculty, and visitors alike,” said Whittier College President Linda Oubré. To celebrate the gift and the installation of “The Walkers,” Whittier College will host an Opening Reception and Artist Talk on Sunday, May 5th from 2 p.m. to 4 p.m., starting in A. J. Villalobos Hall (doors will open at 1:30 p.m.). Visit whittier.edu/calendar/walkers-opening-reception-and-artist-talk to RSVP for the reception.

In the 1980s, Whittier College had an exchange program in China with what was then called Beijing Teachers College (it is now Capital Normal University).  In 1985-86, one of the two from China was a young teacher there named Wang Xinsheng.  Xinsheng was a really interesting and inquisitive young man.  His younger brother, Wang Luyan, was a budding artist.  The problem was that, back in the 1980s, in China, the only artists who could exhibit and sell their work were “official” artists who conformed to the dictates from the Ministry of Art. Luyan and his friends did all kinds of art that were officially proscribed; when they tried to mount public exhibits, the police shut them down.

So, Robert B. Marks, a professor of History and Environmental Studies at Whittier College, worked to bring Luyan to Whittier College in May 1986 as a visiting artist. A Whittier College student studying in China at our exchange program (Randall Davidson ’88) helped Luyan raise the money for his airfare, and he arrived at Whittier College with a bunch of his art, which they exhibited on campus in what was then called Mendenhall Gallery (it is now Greenleaf Gallery). “Wang Luyan is a great friend of mine and the College, and I am extremely pleased to be part of the team effort that has brought The Walkers to Whittier. They represent, to me, a moving commemoration for his late brother, Wang Xinsheng, who I got know well during his year at the College as an exchange student from China,” said Marks.

Wang Luyan had a highly successful exhibit and was able to sell several paintings both at the College and through the 18th St. Gallery in Santa Monica. Luyan returned home to Beijing, and his elder brother, Xinsheng, remained in the U.S. to pursue a Ph.D. in philosophy, which he received from Baylor University.  In the meantime, the June 4, 1989 crackdown in Tiananmen Square (the iconic photo of the man staring down a tank) rendered it difficult for Xinsheng to return to China…and he never did. He died in 2004. The last time and place Wang Luyan saw his brother was at Whittier College in May 1986.

Over the past 30 years, Davidson and Marks have stayed in touch with Luyan as his career took off. Luyan now does monumentally sized sculptures and installations and has had solo shows the world over. Because Davidson has a career as a VP for Supply Chain in a major import company, it takes him to China periodically, as well as Marks, a historian of China who gets to go to China too, would see him at his studio. The last time they saw Luyan was in October 2017 when he told them he wanted to make a gift of some of his art to Whittier College to commemorate his brother, Xinsheng. That is what the plaque in front of “The Walkers” will say.

The images from the Chinese Avant-Garde and the unofficial paintings of Wang Luyan will be available to view from May 21st to June 5th, Monday through Friday from 9 a.m. to 4:30 p.m. The reception will be on May 21st from 7 p.m. to 9 p.m. at the Mendenhall Gallery at Whittier College.